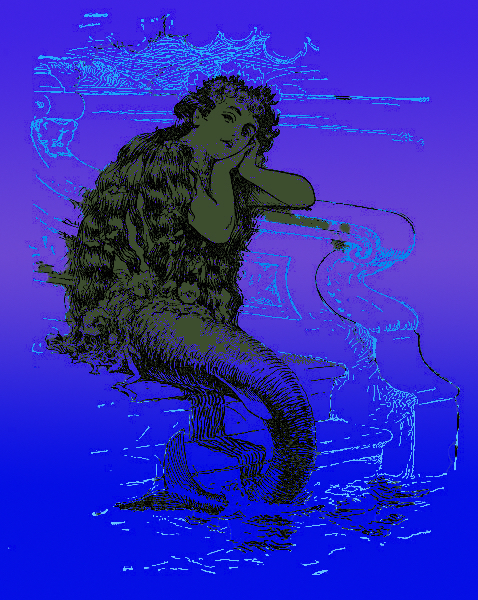 Google “Mermaid sightings” and see how many YouTube and other sites pop up. Animal Planet produced a faux-documentary in 2013 about mermaids. It looks authentic, the voiceover serious and documentary-ish, but the CGI is just off enough to provide the right balance of fantasy-immersion and pragmatic reality.

It’s quaint, but I couldn’t help shake the distress that these fake-umentaries could damage instruction and credibility. And that worry has come to light. I still want to believe in the IDEA of mermaids, (I love mermaids and mermaid lore); however, it is dangerous to make a documentary that many might believe is factual. Currently, in our post-truth era, an Orwellian allusion that’s in itself is too precious and misdirecting,  our futures depend on getting it right. And I marvel and am horrified by how many believe they are right, credible, honest, and intelligent when they are so very blind.

But I can’t look away, I can’t stop questioning, researching, and thinking.

“Once more unto the breach, dear friends, once more;
Or close the wall up with our English dead!
In peace there’s nothing so becomes a man
As modest stillness and humility:
But when the blast of war blows in our ears,
Then imitate the action of the tiger.”

My burning question is how do we tackle the rhetoric of conspiracy theories?

Example: my same relative posted about how CNN is fake news, etc. and his followers posted many actual cases of times CNN has made editorial blunders. So that leads me down one rabbit hole after another. His source, Fox, has had more editorial errors and by many standards, lacks journalistic credibility or standards. No one mentioned Fox’s mistakes. So, check off Point #1: Tunnel Vision.

Not sure how credible this source is: http://www.politifact.com/punditfact/tv/fox/

But yet this just happened: http://www.seattletimes.com/seattle-news/crime/kent-shooting-victim-says-he-was-told-go-back-to-your-own-country/

I responded back something about the inauguration photos. You know the ones — Obama’s and Trump’s, side by side. And that’s when the legion of lies began officially.

My relative responded back, “Oh, you were there? Cool!”

No. But another relative was.

And what if I wasn’t? What a bizarre argument.

I know its intent: the intent is to make me doubt myself, and not question the thousands of things he believes in but has never seen with his own eyes.

Is this the knowledge argument?

The maddening thing, the thing I shake my fist at the gods and shake my head in disbelief is their arrogance (Point #2: Arrogance and hubris) in redirecting any belief.  The lack of conceding any point. So no dialogue is possible.

For every scientific and social construct, they have a rebuttal. (Point #3: Dart-throw but offer no solutions)

I’ve never seen a mermaid. I’m fairly certain they don’t exist. Perhaps they came from the desire of sailors seeing mirages in the water, fearful of women and drowning in the deep, mixing the two together to create a narrative that the siren song defends them from all accountability and responsibility of keeping their own stuff together. It’s always convenient to blame falling off a boat on a fish-woman. Point #4: Blame others.  I have never touched a blue whale, either, but unlike mermaids, am pretty sure they exist. There are photographs, scientists, animal lovers, artists, whaling hunts, etc. and whole industries based on whaling throughout history. I did step on a whaling boat in Mystic, Connecticut once. It’s no longer seaworthy or in use, but I didn’t question whether or not it was once used to hunt whales. But by my relative’s logic, since I wasn’t physically at the inauguration (he wasn’t either), my conclusion is invalid. Point #5: Thinking conclusions and evidence are the same things. They’re not. The evidence is the two crowd sizes differed in numbers. That does not mean I think anything. He assumed I did.

But here is where I will leave this, for now, until I need to go to the breach, once more: it is a waste of time to talk to someone on their own echo chamber. Every point made, every piece of evidence, every possible conclusion or theory will be met with some fallacious argumentative rhetoric which to them, sounds pithy and intelligent.

They are croaking toads, and nothing more, belching out lies and fear to seek attention. And that is my ad hominem misstep. I am in the process of trying to not care, not give this oxygen, so if I think of people as nothing more than croaking toads that helps, temporarily. The futility of trying to change anyone’s mind who’s over the age of 25 upsets me. It’s become too dangerous and weird. The enormity of they don’t know what they don’t know is too burdensome at times. But I’m about to go drink coffee and watch the latest episode of Saturday Night Live: laughter and caffeine heals a lot of wounds.

One thought on “The Mermaid Qualia Theory”