Yes, a Thursday night in August, not many days until I start back, though I haven’t really stopped. One week of a writing workshop class, and in the middle of two weeks of a Common Core ELA/SS exploration course, both at University of Washington through PSWP. This involves waking up at 5AM, meeting two colleagues in our work parking lot by 7AM, and spending many hours in a stuffy, fluorescent-lit room–but wouldn’t trade it for anything. Well, okay maybe a sandy beach and swimming-pool sized adult beverages, but other than that…meeting new colleagues and refining work and pedagogical know-how–pretty cool stuff.

So in an effort to refocus my energies to 7th grade US History, I am thinking about the role of disease in our history. When asked what things affect the course of events, most folks would answer war, religion, change of power, etc. To me, disease may not be a direct conflict, but it is a formidable catalyst. Our own nation’s relationship with disease and health/medical access, treatment, and prevention is essential to analyze and seek to understand.

Some essential questions may include:

What role does disease play in how America grew as a nation? What effects or consequences had a larger impact?

What is the role of medicine and health care in American’s growth as a nation? Who has access to medical treatment, and how does that create differences or similarities among its people?

If you think of something that piques your interest, my esteemed colleagues, please comment.

An epidemic of fever sweeps through the streets of 1793 Philadelphia in this novel from Laurie Halse Anderson where “the plot rages like the epidemic itself” (The New York Times Book Review).

During the summer of 1793, Mattie Cook lives above the family coffee shop with her widowed mother and grandfather. Mattie spends her days avoiding chores and making plans to turn the family business into the finest Philadelphia has ever seen. But then the fever breaks out.

Disease sweeps the streets, destroying everything in its path and turning Mattie’s world upside down. At her feverish mother’s insistence, Mattie flees the city with her grandfather. But she soon discovers that the sickness is everywhere, and Mattie must learn quickly how to survive in a city turned frantic with disease. 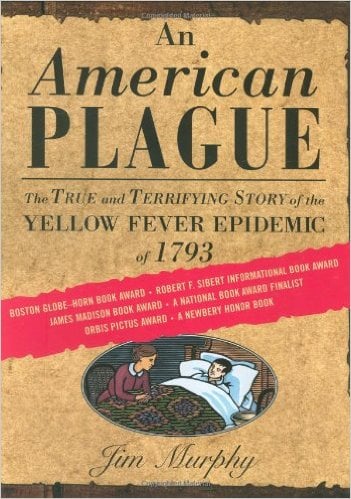 1793, Philadelphia. The nation’s capital and the largest city in North America is devastated by an apparently incurable disease, cause unknown . . .

In a powerful, dramatic narrative, critically acclaimed author Jim Murphy describes the illness known as yellow fever and the toll it took on the city’s residents, relating the epidemic to the major social and political events of the day and to 18th-century medical beliefs and practices. Drawing on first-hand accounts, Murphy spotlights the heroic role of Philadelphia’s free blacks in combating the disease, and the Constitutional crisis that President Washington faced when he was forced to leave the city–and all his papers–while escaping the deadly contagion. The search for the fever’s causes and cure, not found for more than a century afterward, provides a suspenseful counterpoint to this riveting true story of a city under siege.

An American Plague‘s numerous awards include a Sibert Medal, a Newbery Honor, and designation as a National Book Award Finalist. Thoroughly researched, generously illustrated with fascinating archival prints, and unflinching in its discussion of medical details, this book offers a glimpse into the conditions of American cities at the time of our nation’s birth while drawing timely parallels to modern-day epidemics. Bibliography, map, index.

Could Yellow Fever Return to the United States? from the Public Library of Science

Now, which to read first, the non-fiction or historical fiction? Of course this brings up other major epidemics we have feared, faced, or flee from: small pox, polio, ebola–and the questions about the ‘anti vaccers’ in our nation’s dialogue – what would they have thought if they lived in Philadelphia in 1793? How does historical presence affect one’s opinion?