Years ago I read The Life of Pi by Yann Martel. I didn’t have anyone to share my thoughts about it with, until later a friend casually mentioned she hated it. It never occurred to me until that moment that someone I loved wouldn’t love the book, too, or at least find some worthwhile metaphor. Those little moments, when we don’t connect with someone we love, are odd…but it happens. Life would be unbearably boring if we all thought and believed the same things. The thing that nags at me, though, is when we realize someone we love believes or has a different opinion, we often awkwardly dismiss the moment, and don’t ask their point of view or perspective. It’s like we’re trying to be polite and not come off as challenging or argumentative. (Because especially us ladies…oh boy do we ever get in a pickle when we state our opinions…)

But these are not discussions about literary preferences, or who prefers microbrews to martinis. Some have a chemical hatred of cilantro, while others find its presence the only thing that matters. (I am the latter.) This is about something that cuts, and has cut us all, much more deeply, and perhaps left some scars. There is no denying in our nation’s point in history we are in deep, deep trouble, and not necessarily all because of who’s in office. We hate each other now, and if we don’t hate, we are suspicious to a terrifying degree.

This afternoon I found some of the advice I needed reminding of, and how much I failed in a recent exchange: How to Convince Someone When Facts Fail published in Scientific American, written by Michael Shermer almost a year ago.

If corrective facts only make matters worse, what can we do to convince people of the error of their beliefs? From my experience, 1. keep emotions out of the exchange, 2. discuss, don’t attack (no ad hominem and no ad Hitlerum), 3. listen carefully and try to articulate the other position accurately, 4. show respect, 5. acknowledge that you understand why someone might hold that opinion, and 6. try to show how changing facts does not necessarily mean changing worldviews. These strategies may not always work to change people’s minds, but now that the nation has just been put through a political fact-check wringer, they may help reduce unnecessary divisiveness.

Numbers 1 and 2 are where the wheels came off my bus, so to speak. And, in fairness, I am wondering if I’m now experiencing my own media saturation, or “availability bias,” jumping at every shadow — because there are so many now–

Rothschild blamed politicians for overstating the terrorist risk. Media saturation is also to blame. Having ready access to images of every atrocity known to mankind makes us prone to what behavioral scientists call “availability bias,” the tendency to give weight to what comes to mind most easily. The blanket coverage of the Sept. 11th attacks successfully seared the images of terrorism on our brains; shootings, which happen every day and—with the exception of a few mass shootings—are largely ignored, have less of an effect.

We are all jumping at shadows, but unfortunately, many of those shadows have weapons.

It is one thing when strangers have unfounded beliefs, but a whole ‘another issue when it’s a relative or close friend.

Here is the conversation with my annotations:

Someone I know, a family member I considered the closest thing to a brother I could have, posts about Trump’s EO (the fully annotated version here), which confuses my husband and me because first “they” say they don’t want anything to do with Obama, and then they bring up a (false) comparison between Obama’s 2011 issue and Trump’s. Their point is that Trump’s is not a “Muslim Ban,” although Rudy Guiliani is on tape telling the world how he helped Trump do it legally. So, those of us millions who are against this call it out, and especially in light of Bannon’s appointment to National Security Council, and he’s a self-proclaimed Leninist (aka “some just want to see the world burn), that causes a huge amount of concern.* 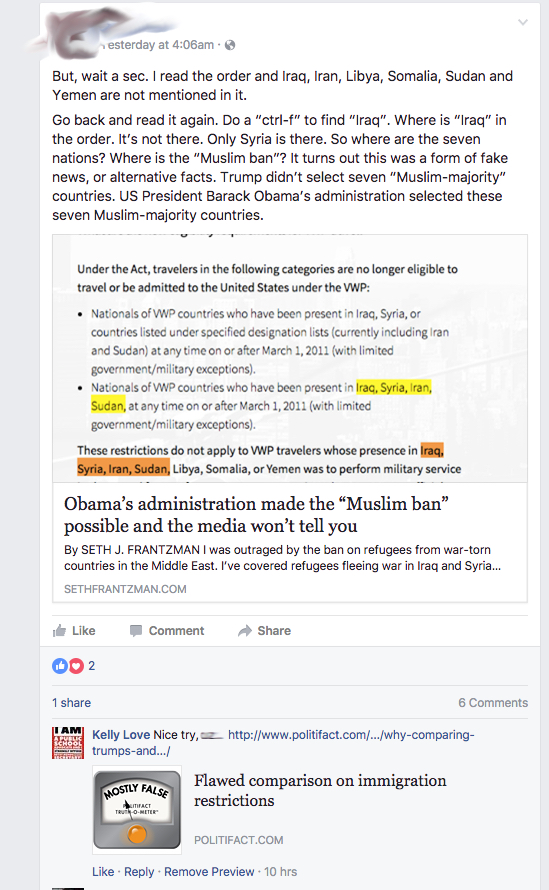 The Politifact source is called “fake news” by my relative, although it is a Pulitzer Prize-winning site. It must be convenient for those who actually believed fake news to now use that as a false counter-argument for everything they disagree with. 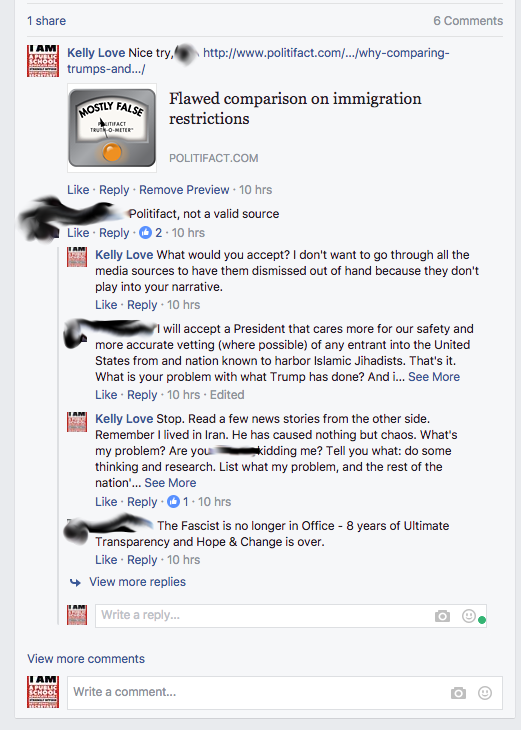 And that is when I lost my stuff. Calling Obama a “fascist” is so distorted and wrong– and I had the painful anagnorisis** that not only was my relative living in some distortion field that so many of his race, gender, background, and beliefs led him to.

Taking a pause here: I stand by the Politifact article:

It does what I wish all students and citizens would do: take a step-by-step analysis and provide CONTEXT AND COUNTERARGUMENTS. Yes, big all-caps. Without context no discussion is possible.

In this entire post, there is one nugget I want my relative, and others, to take away–and this is discourse 101. 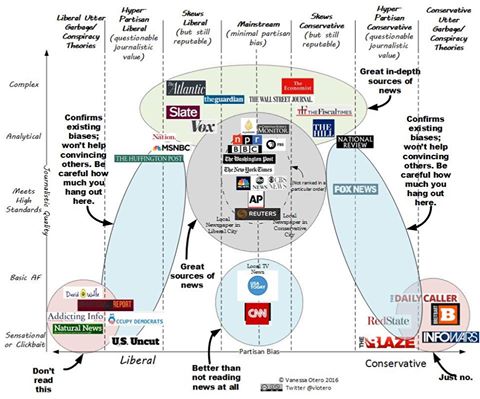 About this time I turned off notifications, so I didn’t see his comments asking if I had read the EO: in truth, I had read some of the highlights from various news sources, including his preferred sources.

His anecdote about the Somalian Uber driver isn’t a lie, of course. Anecdotes don’t require proof.  There were many who voted against their interests, and there is a psychological effect of “I’m here safe, so the hell with the rest of them.” And, his Somalian driver did not weigh in with all the white terrorists who have killed more folks than Somalians living here.  He won’t believe CNN because his leader called them “fake,” but I’ll post it anyway. A couple who voted for Trump appeared on the news recently for having regrets. People vote against their best interests all the time because they go on anecdotes, fear, and misinformation. People have a bent for authoritarianism, too.

But this contention that ‘it’s not a Muslim ban’ is clearly transparent, and a big, fat lie. The one woman who could put a stop to it did, and was fired:

As acting attorney general, Ms. Yates picked the fight of her life on Monday when she ordered the Justice Department not to defend President Trump’s executive order blocking refugees and restricting immigration to the United States. Ms. Yates became convinced, based on the president’s own statements, that he had intended to unlawfully single out Muslims, senior officials said.

“We have comments from the president about what this is supposed to do,” Ms. Yates said in one meeting on Monday, according to two people involved in the discussions. She later added, “The intent was clear from the face of it.”

And here is John Green, who somehow manages to do the smart, calm thing, and provide a piece about this EO:

Here are my opinions (just a few, I have more):

What is my conclusion in all this? Am I feeling more heartsick and discouraged, or calmer, with clarity? Yes, the latter. I am not going to engage in these pointless battles. If the person on the other end wants to reach clarity and purpose, understand that we can disagree, but have to do so with facts and strong listening skills. (My “grow up” comment does not fit this category.)

So yes, that is the president’s press secretary rationalizing why it was important to our national security and safety to handcuff a five-year-old. Most of the things happening now come from their own mouths, on tape.  They can try to gaslight us all they want, but we are not the same 20th century generation– we are far worse, and far better. It’s about understanding the onslaught of information, and not allowing their lies to stand. It isn’t fake news. If anyone wonders why most Americans are fighting so hard to end his time in office before he and his ilk destroy the Constitution, maybe you’ll join us, too, once you see for yourself.

But I won’t hold my breath: I’ll breathe and keep working to make things right.

*Not sure how The Daily Beast stacks up. To research later.

**Anagnorisis is a moment in a play or other work when a character makes a critical discovery. Anagnorisis originally meant recognition in its Greek context, not only of a person but also of what that person stood for. Anagnorisis was the hero’s sudden awareness of a real situation, the realisation of things as they stood, and finally, the hero’s insight into a relationship with an often antagonistic character in Aristotelian tragedy.

In other words: OH, snap. Things are much worse than I thought.