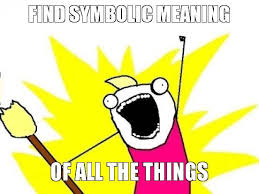 There are veteran English teachers shuddering ‘tsk tsk’ at the title of this post, as if to suggest it’s a simple process, and doesn’t take years of practice, studying, and scholarly pursuits. And reading. A lot of reading. (And if you’re a middle school teacher, some dislike that age group of literature: I find it to be some of the most honest and terrifying. Really think about The Giver? Nightmare fuel.)

About two weeks ago, one of my colleagues, who ventured on a long time ago to do great things, asked me if I was still teaching the “Journey of the Hero” unit which I played an integral part in developing. When we worked together, he even gave me a gift that belonged to his grandfather, a copy of Joseph Campbell’s The Power of Myth. I sighed and said no, that I had asked if I could update it to embed CCSS, since the Common Core seemed perfectly aligned to something as accessible as the journey of the hero –it is a unit that lends itself so beautifully to showing patterns of thought to develop thematic concepts. But, no matter. It’s not the only thematic game in town.

CCSS.ELA-LITERACY.RL.8.9
Analyze how a modern work of fiction draws on themes, patterns of events, or character types from myths, traditional stories, or religious works such as the Bible, including describing how the material is rendered new.

But the move in our district seems to be choosing more stand-alone novels, without context or connection to other content areas, and that’s fine. It’s fine because it helps teachers focus on specific close reading skills, and not worry about how does it support other content areas. That may be a traditional approach to English/Language Arts, the ‘whole class novel’ as opposed to novel or text sets that are thematic and tied to multiple concepts and curriculum. I’m not really sure. It’s one of those tidbits I packed from reading Kelly Gallagher: things change, and change back, and be a critical thinker of what to keep, and what to throw away.

This is a long excerpt from How To Read Literature Like a Professor by Thomas C. Foster. If you want “How to be an English Teacher” this is it. Fortunately, not only do I have engaging authors like Foster when I want to brush up on my subtext and genre themes, but I have my husband and sons, who love to talk about the big ideas, no English degree necessary.

OKAY, SO HERE’S THE DEAL: let’s say, purely hypothetically, you’re reading a book about an average sixteen-year-old kid in the summer of 1968. The kid— let’s call him Kip— who hopes his acne clears up before he gets drafted, is on his way to the A& P. His bike is a one-speed with a coaster brake and therefore deeply humiliating, and riding it to run an errand for his mother makes it even worse. Along the way he has a couple of disturbing experiences, including a minorly unpleasant encounter with a German shepherd, topped off in the supermarket parking lot where he sees the girl of his dreams, Karen, laughing and horsing around in Tony Vauxhall’s brand-new Barracuda. Now Kip hates Tony already because he has a name like Vauxhall and not like Smith, which Kip thinks is pretty lame as a name to follow Kip, and because the ’Cuda is bright green and goes approximately the speed of light, and also because Tony has never had to work a day in his life. So Karen, who is laughing and having a great time, turns and sees Kip, who has recently asked her out, and she keeps laughing. (She could stop laughing and it wouldn’t matter to us, since we’re considering this structurally. In the story we’re inventing here, though, she keeps laughing.) Kip goes on into the store to buy the loaf of Wonder Bread that his mother told him to pick up, and as he reaches for the bread, he decides right then and there to lie about his age to the Marine recruiter even though it means going to Vietnam, because nothing will ever happen for him in this one-horse burg where the only thing that matters is how much money your old man has. Either that or Kip has a vision of St. Abillard (any saint will do, but our imaginary author picked a comparatively obscure one), whose face appears on one of the red, yellow, or blue balloons. For our purposes, the nature of the decision doesn’t matter any more than whether Karen keeps laughing or which color balloon manifests the saint. What just happened here?

If you were an English professor, and not even a particularly weird English professor, you’d know that you’d just watched a knight have a not very suitable encounter with his nemesis. In other words, a quest just happened.But it just looked like a trip to the store for some white bread. True. But consider the quest. Of what does it consist? A knight, a dangerous road, a Holy Grail (whatever one of those may be), at least one dragon, one evil knight, one princess. Sound about right? That’s a list I can live with: a knight (named Kip), a dangerous road (nasty German shepherds), a Holy Grail (one form of which is a loaf of Wonder Bread), at least one dragon (trust me, a ’68 ’Cuda could definitely breathe fire), one evil knight (Tony), one princess (who can either keep laughing or stop). Seems like a bit of a stretch. On the surface, sure. But let’s think structurally. The quest consists of five things: (a) a quester, (b) a place to go, (c) a stated reason to go there, (d) challenges and trials en route, and (e) a real reason to go there. Item (a) is easy; a quester is just a person who goes on a quest, whether or not he knows it’s a quest. In fact, usually he doesn’t know. Items (b) and (c) should be considered together: someone tells our protagonist, our hero, who need not look very heroic, to go somewhere and do something. Go in search of the Holy Grail. Go to the store for bread. Go to Vegas and whack a guy. Tasks of varying nobility, to be sure, but structurally all the same. Go there, do that. Note that I said the stated reason for the quest. That’s because of item (e). The real reason for a quest never involves the stated reason. In fact, more often than not, the quester fails at the stated task. So why do they go and why do we care? They go because of the stated task, mistakenly believing that it is their real mission. We know, however, that their quest is educational. They don’t know enough about the only subject that really matters: themselves. The real reason for a quest is always self-knowledge. That’s why questers are so often young, inexperienced, immature, sheltered. Forty-five-year-old men either have self-knowledge or they’re never going to get it, while your average sixteen-to-seventeen-year-old kid is likely to have a long way to go in the self-knowledge department.

Foster, Thomas C. (2014-02-25). How to Read Literature Like a Professor Revised: A Lively and Entertaining Guide to Reading Between the Lines (pp. 2-3). HarperCollins. Kindle Edition.

The TL:DR version is there are patterns in genres. Don’t be fooled by surface topics. Dig deeper. Talk. Think.

Recently NPR aired a story about Dungeons and Dragons, and how it sustains current gaming now; however, that was not the the gaming industry that caught my attention, but writers who used the writing involved with D&D, and how that launched their careers. Consider this when planning a unit on reading–connect the story to what students love–they love their own narratives, and incorporate free-form writing with their reading. They love when they see the pattern, and feel capable of understanding the big ideas–the big ideas are accessible and not put out of reach like dangerous cleaning supplies.

Ultimately I tell students trust their instincts–take a risk. What do they think is going on? Spit-ball some ideas, and see what sticks. Metaphorical spit-balls, that is. Please. For teachers wanting to know more about how to teach a novel, I would say the same: trust your instincts, be willing to talk, and open to new ideas about the book. It’s acceptable and encouraged to see another’s view point, and not necessarily accept it as your own. I wouldn’t know half as much if I read in isolation and never talked about movies or books I watched–not that that has to happen all the time. Balance and connection – and willingness to learn something new.

As I said in a previous post, Gluing the Wings Back On, all this analysis has somewhat disrupted my own reading life. For fun, I’m reading The Winter Witch by Paula Brackston. It’s a romance. Know how I know? The heroine conveniently can’t/won’t speak, and forces her new husband to communicate with gestures, glances, and inferences. Talk about forcing your partner to truly listen. Every paragraph is a volley of “does he love me, does he not?” and for some reason she can’t write him a note. Her lack of writing literacy hasn’t been addressed yet, and I’m not sure it will be. Sometimes I wish I could read this sort of stuff as a 12-year-old. Unlike The Witch’s Boy by Michael Gruber, which is truly a magical book–a retelling of a classic fairy tale with grit, and takes the patterns and practice of fairy tale into a realm of authenticity and surprise. (It takes a lot to surprise me about a fairy tale, and someday perhaps a romance will surprise me again, too. So far only The Princess Bride and just about anything by John Irving have taught me new narratives about romance. Okay…Jane Austen, too. And The Night Circus by Erin Morgenstern.) But I digress – perhaps this is a post for another time: what authors speak to our life’s themes?

Till next time – turning the page.